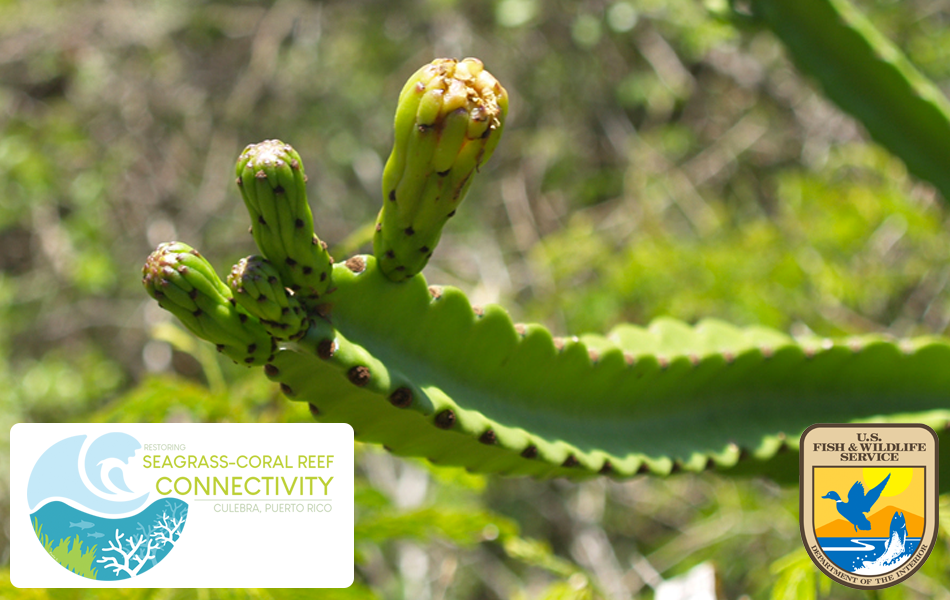 The current flattened conditions of coral reefs and the impaired seagrass meadows across Culebra have decreased their capacity to protect the coastline from waves, storm surges, and inundation putting at risk the stability and functionality of coastal plant communities. One of the most susceptible cacti species to the increased sea wave’s erosional forces is the endangered Leptocereus grantianus. This endemic cactus to Culebra Island was listed as an endangered species by the USFWS in 1993. As of 2015, there were six known natural populations on the Island with an estimated total abundance of only 261 individuals, 82% of them found within private lands. The size of the population ranges between 2 and 25 individuals. Populations are not only small, but they have also shown little capacity to propagate themselves, probably because habitat loss (i.e., deforestation) and predation by exotic species such as deer and goats may be limiting natural recruitment. Also of great concern is that many individuals inhabit areas susceptible to soil destabilization by wave-induced coastal erosion. Therefore, the development of strategies directed both at increasing local population size and at attenuating the force of waves affecting the coast is necessary to assure the persistence of L. grantianus at Punta Soldado (PSOL) and Cascajo (CAS).

The proposed project aims to increase the probability of population prevalence of L. grantianus across the coastline of Culebra Island.  The project will consist of three major activities: First, we propose to protect the wild populations at PSOL and CAS from damaging waves by increasing the capacity of adjacent coral reefs and seagrass beds to buffer wave energy with the involvement of trained Citizen Scientists. In-situ sensors will be used to monitor the levels of wave attenuation, and coral reef structural complexity will be restored by employing a multi-method restoration approach that combines the outplanting of fast-growing reef-forming coral species (A. palmata and A. cervicornis) and the stabilization of the reef substrate (e.g., coral rubble). Seagrass cover within coral reefs and the shoreline will be increased by transplanting plants from in-situ nurseries. Second, we will establish new self-sustainable populations of L. grantianus at PSOL and CAS and enhance the associated coastal habitat in coordination with USFWS staff. Third, we will perform a comprehensive demographic study, including the phenology of the species. Effective conservation initiatives cannot be achieved without proper quantitative analyses and an understanding of the population dynamics of the targeted species. At the same time, conservation management strategies often depend on predictions of population dynamics, which can be only achieved through demographic modeling. Thus, the restoration project will include a population (demographic) model parameterized with the demographic data obtained from the wild and restored populations to quantify and project the ecological effort (i.e., the number of transplants and frequency of outplant activities) necessary to assure the viability of the populations.

How Can You Help

©Sociedad Ambiente Marino 2001 – | All rights reserved | Designed and hosted by